Corporate tax rates have been falling for over 40 years, and many people think it’s time for a change. And we could be about to see it. In July 2021, 130 nations supported a global minimum corporate tax of 15%.

But what difference would it really make?

Small business financing provider OnDeck decided to investigate. Using data collected from KPMG, the Tax Foundation and various government websites, he applied each country’s tax laws to a model company to see how much tax companies currently pay around the world.

Here’s what they find

Europe is a great place to do business, especially for start-ups or young entrepreneurs. It takes less than two weeks to incorporate a new company in Europe, and the continent has some of the most competitive corporate tax rates in the world.

Small businesses operating in Europe pay approximately 17.9% corporation tax; this is the lowest rate in the world outside the Middle East and Central Asia. This is one of the main reasons why several small European countries are becoming global startup hubs. Thanks to a generous tax rate of only 12.9%, Cyprus has the third highest number of business registrations per year.

By global standards, 12.9% is low. But this is nowhere near as low as the corporate tax rate in Monaco. Companies based in the Billionaire’s Playground pay 0% tax. But there is a catch; to benefit from this tax exemption, companies must derive at least 75% of their turnover from activities carried out within Monegasque borders.

How businesses are taxed in North America

Taxation is a complicated matter in the United States. The country’s state system means that corporate tax rates vary widely. So while the national average is 25.6%, how much individual businesses actually pay depends on where they make their money.

Corporations in high-tax states like New Jersey face double-digit tax rates. Companies in North Carolina, Missouri and Oklahoma pay less than 5% of their profits to the Inland Revenue Service.

Depending on your political belief, things are getting better (or worse) for businesses located in Delaware. It has been an internal tax haven since the 19th century. Delaware has no Value Added Taxes (VAT), no inheritance taxes, no equity or stock transfer rights, and a 0% “business friendly” corporation tax .

About 1,000,000 companies are headquartered in this tiny mid-Atlantic US state, including 67% of Fortune 500 companies. This is due to what commentators (and critics) call the Delaware loophole. It is a state law that allows large businesses to report certain types of income in the state where the company is incorporated rather than in the states where they operate.

The average corporate tax rate in South America is 26.1%; this is the highest figure of any continent.

High levels of bureaucracy (combined with pockets of corruption) is another reason why South America is not the most business-friendly place on the planet. Incorporating a new business can take over 40 days and start-up costs amount to 41.4% of gross national income per capita.

Suriname has the highest corporate tax rate on the continent; it’s 36.0%. And it doesn’t look like small businesses will drive economic recovery in Venezuela anytime soon. In addition to operating in a collapsing economy, business owners face a high corporate tax rate of 34%. And those who want to start a new business have to shell out more than double their annual salary in set-up and other administration costs.

But things are much easier for business owners in southern countries of the continent. Chile and Uruguay have some of the lowest corporate tax rates in South America, and those operating in Paraguay pay just 10%.

Taxing small businesses in the Middle East and Central Asia

The Middle East and Central Asia has the lowest average corporate tax rate in the world (16.2%). But given the size of the region, it’s no surprise that the numbers vary widely from country to country.

Corporate taxes tend to be lower in countries with significant natural resources, including Turkemenstain, Qatar and Kazakhstan. Their governments collect large amounts of revenue from the oil and gas industries, which enables them to offer generous tax breaks to companies outside of these sectors. For example, companies that do not operate in the oil and gas sectors of Bahrain or the United Arab Emirates pay 0% corporate tax.

Companies located in Turkey, Iran and Syria must set aside 25% of their annual profits for corporate tax.

Corporate taxes in Oceania and the rest of Asia

With nearly five billion people and more than 2,000 recognized languages, Asia is one of the most diverse regions on the planet. And its corporate tax rates are just as varied. In fact, corporate tax rates vary more in this region than anywhere else.

At the bottom of the scale are countries like Vanuatu and Naura. Their tax laws mean that companies are effectively exempt from tax on their profits. But the 0% rate has nothing to do with trying to attract big business to these small islands. Instead, it reflects their libertarian ideals that value individual freedom and self-sufficiency.

Vanuatu and Naura are really exceptions. The corporate tax map shows that most countries in Oceania and the rest of Asia have a flat tax rate of 30%. It’s a bit higher in Japan, where the tax rate is 36%.

Despite being home to some of today’s fastest growing economies, Africa is the least competitive continent in terms of corporate tax rates. On average, this amounts to more than 27%; this means that more than a quarter of the profits go into the hands of the government.

This figure is even higher in Zambia, Chad and Sudan, where business owners are taxed at 35%. Somali companies get a much better deal; the effective corporate tax rate in Somalia is only 12.3%.

The proposed minimum tax rate of 15% will undoubtedly have an impact on mega-corporations that establish their headquarters in global tax havens. But for now, the proposal is little more than a speech. We’ll have to wait and see if that ever translates into real action. 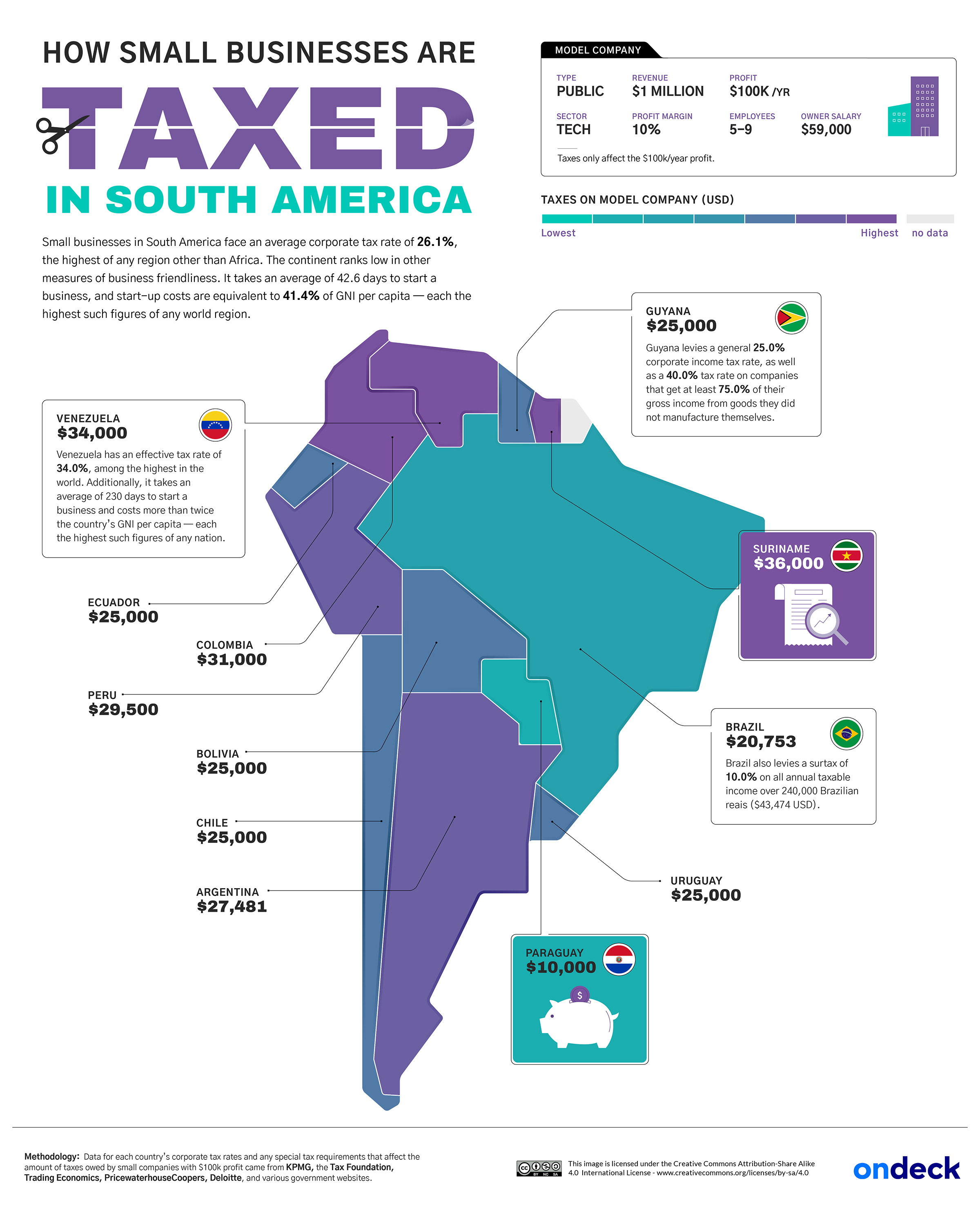 Read next: Majority of cyberattacks in 2021 targeted educational and government institutions